TOPAZ - The Other Gemstone That Lasts Forever 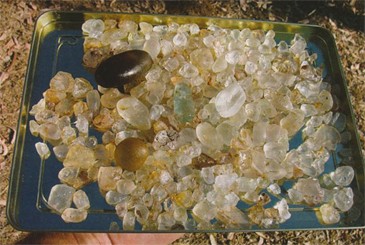 Every year over the winter months of May through September there occurs a migration, or perhaps more accurately a pilgrimage, of many people to a small area of land approximately 40kms outside of Mt Surprise in North Queensland. They come from all over the country, especially from down south escaping the cold climes. They arrive at a place called O'Briens Creek and for those winter months the scenic campground found there takes on a village atmosphere.

Why do they come? Well, besides the glorious sunshine and blue skies, bush scenery and familiar faces, they're here for the TOPAZ!

O'Briens Creek is approximately 10,000Ha of land that the state government has designated as a public fossicking area. An inexpensive licence is all that is required for you to be allowed to dig here. Equipment is basic - a shovel, pick or (my personal favorite) crowbar, seive and a stand to put it on.

Topaz is that other great Australian gemstone that surprisingly few people in the mainstream know about. Everyone is familiar with opals from Lightening Ridge and Coober Pedy, the sapphires from Rubyvale and Sapphire, even the diamonds from the Argyle, but topaz tends to draw a blank. Ah, if only people knew!

The area where the topaz is found is very old, rugged, pink granite country. Geologist have estimated the age of the old pink granite hills to be around 300 millions years! The topaz was formed at this time which make it some very old gemstone. It never ceases to give me pause when I find a topaz to know that I'm the first person to hold that stone in my hand in it's 300 million year life and to know that it can easily last another 300 million years or more... long enough perhaps to be forever.


Technically, topaz has an aluminium fluor-silicate chemical composition. The name "topaz" is thought to be derived from a place of discovery on an island in the Red Sea once called Topazos (now Zebirget). The vast majority of the topaz found at O'Briens Creek is clear and colourless (like a diamond) and is unearthed either as water worn pebbles or in its crystal form. It can be found the size of a pea up to awe inspiring specimens. I've personally held topaz the size of oranges in my hand.

However, what everyone is chasing are the blues... these are scarce, maybe one or two in a hundred have the sought after pale blue colour, fewer still are flawless and good for cutting. Very, very rare are the yellows and greens and if you find yourself one of these beauties count yourself fortunate in the extreme. You might only hear of one or two for the whole season being found, if that. They are there but you've got to move alot of dirt and rock first... but hey, you never know your luck, topaz is where you find it.

Topaz, with a Moh's hardness of 8 is a perfect gemstone for everyday jewellery wear. It cuts a very brilliant stone and the blues especially are stunning with the colour easily rivalling the best that aquamarine can offer (IMHO) at a fraction of the price. The blue is a very feminine "elegant" blue... I don't know how else to put it. It just has a special quality about it. This blue colour is entirely natural and is not to be confused with the artifically irradiated and heated blue topaz (which mostly comes from Brazil) that is cheap and plentiful in many jewellery shops. These artifical blues have trade names of "London Blue", "Swiss Blue", etc.

This wonderful gemstone is one of my favourites to cut, certainly a favorite among those out at the fields and its pedigree is first rate. Among those in the know, an O'Briens Creek topaz is a desirable and special gem... especially those blues!